January 02, 2019
I have some not so good news. When I took Como, Russ, and Enid in for spay/neuter surgery, I feel like was bamboozled. I took three kittens in on my day off on a pre-scheduled appointment. When I arrived, I was told "We only spay/neuter kittens six months or older." That's fine, but would have been nice to know when I CALLED AND TOLD YOU I HAD THREE KITTENS TO BRING IN.

Not only that, but I was charged almost as much just for vaccinations as the price I was quoted for spay/neuter and rabies shots. I'm pissed to say the least. I'm not naive; I expected setbacks, but I despise dishonesty. We're a small organization and don't have a lot of funding, so I feel like I wasted my time and PCCR's money. However, three of the kittens have had their first round of shots, a rabies vaccination, and have been de-wormed. I now have a tray of kitten shots in my fridge, so I won't have to go through this with the other two (thank you, generous donor!). Every kitten that comes through the door will get at least one round of kitten shots from now on.

In other sad news, Shadow is sick. I think it's just a URI, and I hope that a round of antibiotics will clear it up. The poor meep has goopy eyes, a runny nose, he's pretty lethargic, and isn't eating well. Of course, he's the shy one of the bunch so I don't see him as often as the others and I really didn't notice until yesterday. He got dropped at the vet this morning. Let's hope the other four don't get it. 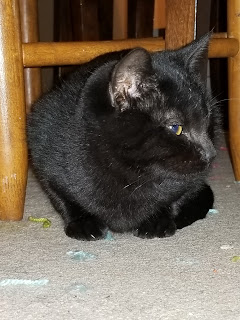 The GOOD news is that I have two or three of the kittens adopted as soon as I can get them neutered. I have applied for funding from several sources and hoping like hell we get approved for something.

Our total donations for 2018 were $860! We are so grateful to our supporters. If you would like to donate, we would sincerely appreciate your support.

Popular posts from this blog

November 13, 2018
My house has long been a stray cat magnet. I don't know if they smell the cat food, or if people drop them off because they know I'm going to take care of them. Four of the five cats I currently have were strays. I recently set up a trail cam on my porch to get an accurate count of how many cats I'm actually feeding. I've seen two extra cats and one very fat raccoon so far, so I'm hoping to get pictures. This is not just a problem at my house, though. All over town you see cats and kittens dashing between the shadows or foraging in dumpsters. I've picked up kittens off the side of country roads and gotten them a new home or to a rescue. I've decided it's time to make my actions official and start a non-profit dedicated to managing the feral cat population with TNR (trap, neuter, release), and finding homes for feral kittens and stray adults. You can read more about the difference between stray and feral cats here . To that end, I'm going to need
Post a Comment
Read more

Well, the past two weeks have been interesting...

April 18, 2019
On 4/5 I got a call that there was a kitten at Dunlap & Kyle that needed to be picked up. They have no idea how he got there, and he was only about 4 weeks old at the time. They named him Gutter, because they found him in the parking lot gutter. The same day I got another frantic call from Morris Lawn Service about a kitten that was found in the back of one of their work trucks. He turned out to be about 2 weeks old. Emily took both of them and they are doing really well.   Monday 4/8 someone threw 4 kittens out on the side of Bell Road in a box. They were no more than 2-3 days old. They are in with a nursing mom in Sardis and are thriving. On Thursday I got a call about a friendly stray someone let in so she could have her kittens in safety. I've been trying to save room in our Caternity Ward for cats who are in immediate danger, but I'm really glad I took her. Saturday, in one of the worst storms we've had in a while, the calico at Walmart that everyone has
Post a Comment
Read more

PCCR is a Bissell Partner for Pets

August 08, 2019
What this means is we will be able to apply for grant opportunities through the Bissell Pet Foundation. Check them out !
Post a Comment
Read more